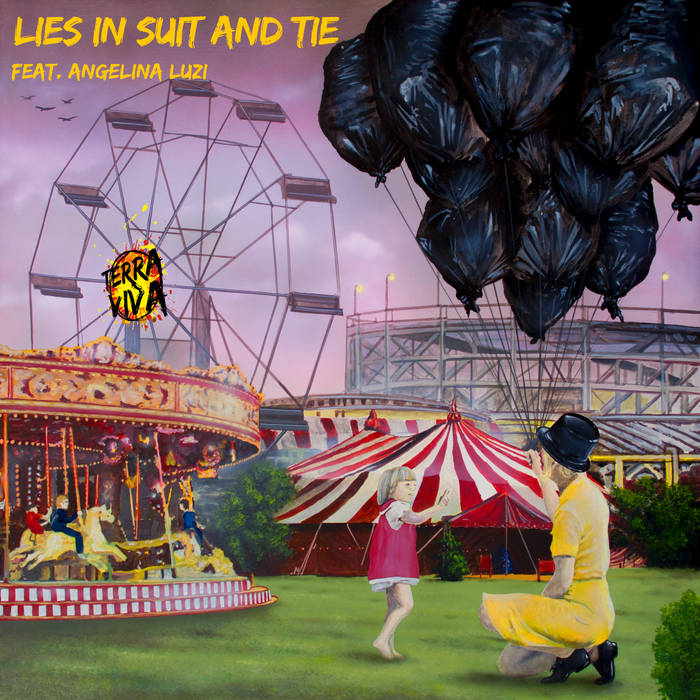 Lies in Suit and Tie’s penchant for catchy and danceable numbers is evident just as much as its commitment to tackle socio-political and environmental issues. This seemingly contradictory statement is central to the ethos of the collective. The mainstream media filtering the truth on immigration, climate change, gentrification and Brexit are some of the topics explored within the lyrics.
From a stylistic viewpoint, the album reflects the blend of influences each and every member brings in. During the course of the 8 tracks you will hear hints of Balkan and Afro-beat, southern Italian rhythms, Rock and Ska alike.
The album opens with the single “Extinction Rebellion” and continues with “One Too Many”, a fast, brass-heavy track with an unmistakable Balkan flavour.
“Ma Chi” follows suit and denounces the human trafficking business ran by the mafia in Italy. It is one of only 2 songs written in Italian and features a dense strings arrangement, over-driven guitar and trumpet. Nestled among many fast-paced and high-energy numbers, “Horizon” is the only ballad to appear on the album. It features predominantly acoustic instruments such as double bass, acoustic guitar and Bouzuki.

Terra Viva is a 5 piece band based in South East London born to discover its Italian roots and mixing their unique sound with a London twist. The social and political topics touched by their lyrics are delivered by their music aimed to make you dance with infectious grooves. Vocalist Angelina Luzi, Devid Dell’Aier-bass, Alessandro-Gugel guitar, Alex Paton-trumpet &mandolin, Matteo Ricordo-drums. ... more

Bandcamp Daily  your guide to the world of Bandcamp